Sizable Savings In The Produce Department 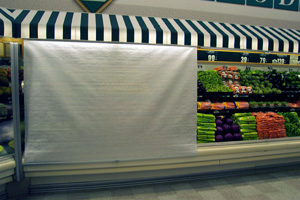 Even in refrigerated produce showcases that included misting systems, the dollar value of spoiled produce can be as high as one dollar per foot of display case per day!

In produce display cases, the refrigerated air is often ineffective in cooling the entire surface area of produce, leaving it vulnerable to heat and UV radiation.

Spoilage of fresh produce is a common problem for many produce managers and night covers are an effective solution in keeping assorted veggies and fruits fresher, longer.

Many supermarkets report considerable shrinkage of produce, especially of items displayed at the front portion of their produce display cases which are beyond the reach of the refrigerated air and spray.

We asked produce managers to estimate the volume/cost of their produce loss due to wilting and drying caused by ambient heat from within the store. Accordingly, the average cost of spoiled produce is estimated to be around $1.00 per foot of display case per day!

A variety of fruit and vegetables are very sensitive to heat and light and it takes very little for them to spoil or turn quickly. Not surprisingly, most produce mangers are quite familiar with the task of daily trimming and are not surprised at the amount of discarded produce and associated lost revenue experienced in produce departments.

However, Econofrost thermal covers can significantly reduce the daily shrink volume in produce departments. Many of the stores we work with report saving over $50 a day just in produce discard. The savings in reduced shrink in a produce department can far outweigh the energy savings. That is why it is so important to cover open produce cabinets with night covers, otherwise you are just throwing money away!

Econofrost woven aluminum night covers deflect heat and UV radiation away from produce display cases, so fresh and organic vegetables retain their natural freshness and appearance. The produce department is one of the major areas where supermarkets define themselves. Being able to reduce produce shrink and discard rates while raising the amount of fresh fruits and vegetables available to shoppers is an objective that translates into even greater sales and savings.

Furthermore, Econofrost night covers also have a positive impact on the efficiency of the case as they ensure optimum case temperature and humidity levels are maintained in produce racks.